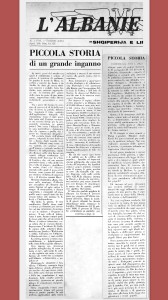 In all the countries of the world where communism has come to power, the attempt to put into practice the theories of Marx, revised and corrected by Lenin and Stalin, has given the same concrete and visible results: fraternal struggles, chaos, mischief, violent appropriation of the power of the State by a minority, suppression of individual freedom, persecution and ruin. Among the countries that have the misfortune of being beyond the Iron Curtain, little Albania has achieved the sad primacy of the integral application of communism. How was this possible? Was there really a fertile ground for communist propaganda in this country? Didn’t Albania have healthy nationalist and democratic forces to oppose what appeared to be rampant communism?

In the final period of the last war, turning the fate of arms in favor of Western armies, Albania, like so many other nations, was reaching out towards that human and natural yearning for freedom and independence. Even Albanians, from the cities to even the most remote villages, listened in the silence of their homes to the “Voice of London” which, with its persuasive accent at times flattering and at times threatening, justified the failure, the mourning and the deadly division in which the country was being torn apart, as the price of the ransom in order to obtain the right to survive and to become free men.

Allied clandestine missions came to the mountains of Albania to gather elements that were willing to act against the occupying troops; and it was especially the Communists who had those weapons and those aids that were to restore freedom and independence to the nation.

But after the war, things changed. Those same weapons were used by the communists to allow a minority to occupy power with violence and deception. And once in power, as is well known, it was always those same weapons that, with a sign from Moscow, turned threateningly towards those who had supplied them. The Corfu incident occurred. The breaking of diplomatic relations with London and Washington and, finally, the alliance between Albania, Soviet Russia and its satellites.

The Iron Curtain descended inexorably and definitively on the set of the Albanian tragedy.

What happens now, through some cracks that spreads from time to time, in the eyes of those who follow with anxiety and trepidation the events taking place in “democratic and popular” Albania?

Unfortunately the situation is very clear: Albania, which after so many painful events escaped the secular greed of its neighbors, robbed of half her territory and population, is today dominated by the concealed Muscovite powers, through a small group of reckless Albanian thugs.

About five thousand Russian technicians experiment the most perfect application of Stalin’s theories on the poor body of this people and carefully credit the great mother of communism.

However, together with this work of high ideology and “disinterested philanthropy”, they assured Russia, with the occupation of the bay of Valona and the island of Saseno, the outlet to the Mediterranean which was not granted to it through the Dardanelles1.

In order to impose the “people’s democratic” regime in Albania, more than 15,000 Albanians have been killed since the day the Reds took power; 11,000 imprisoned; 18,000 dragged into forced labor (9,000 “enemies of the people” work in the Maliq swamp. While thousands more work on the construction of the Durres-Peqin and Durres-Tirana railways, deprived of clothing, bread, roof and other supplies).

The economic and social life of the country is, more or less, that of all the countries that find themselves under Soviet control: poverty, disease, famine, lack of medicines, lack of houses, brutalization of the people, alternated with loud and ferocious manifestations of communist faith.

But what exceeds all limits is the police for the “defense of the people”, unprecedented and unexpected police systems, ranging from blackmail to instigating children against their parents. They keep people in terror even within the family. Who then unfortunately falls into the clutches of the Albanian N.K.V.D.2, educated in Russia and directed by Soviet organizers, can be sure that he does not need to regret the death that awaits him, because it means liberation.

It is known that a few thousand Albanians left their own country to flee abroad at the last moment. Almost all of these refugees have had to abandon everything, including their families. Lately (January 13, 1949) the Tirana government promulgated an amnesty to attract part of the displaced refugees. Paragraph IV of the “amnesty” decree said that “as soon as the fugitive surrenders to the public security authorities, the measures taken against his family are repealed“‘. Nobody has returned home; because the fate of those unhappy families would not have changed anything with the sacrifice of the fugitive. Tossed from city to city, from one concentration camp to another, in terror, misery, humiliation, exposed to cold and hunger, thousands of women and children are dying, victims of a band of irresponsibles.

This is the situation in Albania, now known to the civil and democratic world, because it is the same continuously documented reality in which almost half of living humanity is struggling. How to emerge from it?

The four Foreign Ministers of the winning countries met in Paris on 23 May to resolve the German question. We do not want to put forward hypotheses about it, we are just asking ourselves a distressing question.

If in the dark and often prestigious game of politics, the four will find in the law of barters and reward, that point of equilibrium, albeit fictitious, which will allow them to find the extremes of an understanding around a table in Berlin, will the great Western powers want to delude themselves that they have ensured peace and contributed to the happiness of the people?

And together with them, will they have to believe thousands of human beings who today suffer the consequences of a war that has been fought in the name of freedom, of rights and humanity?

We don’t want to believe it. And it is precisely in the name of a mass made up of millions of individuals of every nationality that today wanders the world without a homeland, without a family; in the name of other beings living in mortal anxiety under the rule of violence and terror; in the name of those who are no longer, having sacrificed their own existence and that of their survivors to the ideals of freedom and just peace; we turn to the representatives of free peoples to tell them:

“The insuring words with which you exhorted us to a struggle that had as its stake our life and that of our countries are still alive and resounding in our ears; and it is for this reason that millions of human beings continue to firmly believe, despite all the disappointments experienced in these post-war years, that you will not want to abandon them to their sad destiny. If God gave you the supreme and heavy burden of righting the fate of all humanity, don’t delude yourselves that a stroke of the pen can heal the tremendous reality which screams justice around the world. This, in order not to betray the most sacred principles of democracy, freedom and justice that are at the basis of the laws that govern your people.”