Born in Fan, Mirdita in 1913. He was one of the original members of the BKI who participated in secret mission drops into Albania from 1949-1953.

This large group was led by Gjon Gjinaj who was a proven warrior with deep knowledge of the area of Mirdita. He was a faithful follower of Kapidan Mark Gjon Marku and had collaborated with him since 1945; he was an expert in this field.

After many preparations, these loyalists of the national cause, on 28 December 1949, descended into the Qaf Kombit forest in Fan, Mirdita.

Within the next two years Gjon led his team into two significant battles; the Battle of Zepe on December 2, 1950 and the Battle of Munella on April 25, 1951.

The letter below was read to the nationalist fighters as soon as they were assembled by Gjon Gjinaj. It was a message from Kapidan Ndue Gjon Marku to his friends. 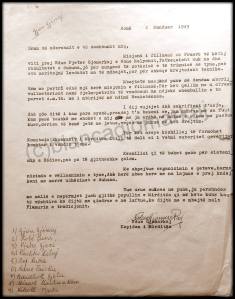 Gjon Gjinaj would eventually emigrate to the United States. He died in New York City on December 23, 1977 under a cloud of suspicion; to this day it remains an unsolved murder. He was a great hero and a great personal friend of the Gjomarkaj family!