In 1947 members of the BKI were contacted by U.S. and British Intelligence regarding possible anti-communist missions into Albania. Consequently a questionnaire was sent to the leadership of the Bloc in trying to gauge their interest in future secret operations into Albania.

This memo is in response to that questionnaire .

It is a copy of the original Italian transcript of the Albanian response sent to the Allies by the leaders of the BKI in 1947. (English version follows). 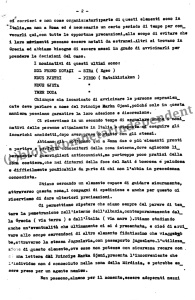