The Albanian Subversion was a Western covert paramilitary operation in the Eastern Bloc. The British SIS and the American CIA launched a joint subversive operation, using as agents Albanian expatriates. Other anti-communist Albanians and many nationalists worked as agents for Greek, Italian and Yugoslav intelligence services, some supported by the UK and U.S. secret services.

A Soviet mole, and later other spies, tipped off the missions to Moscow, which in turn relayed the information to Albania. Consequently many of the agents were caught, put on trial, and either shot or condemned to long prison terms at hard labor.

The Albanian subversion cost the lives of at least 300 men and for a long time was one of the most carefully concealed secrets of the Cold War.

To understand this mission you have to go back to its beginning. The document listed below is the very first document drafted by Ndue Gjon Gjomarkaj and Gjon Markagjoni which support the initial movements for the operation; that being the uprising against anti-communist forces into Albania.

This letter is essentially an ‘order’ to members of the resistance group in exile to ‘invade Mirdita and start an uprising against the communists’.

These were signed by Gjon Marka Gjoni and Ndue Gjomarkaj, the leaders of Mirdita. The letter was to be brought to Mirdita by the appointed leader, Ndue Pjeter Gjomarkaj, a cousin of Ndue Gjon Gjomarkaj and was to be read to the nationalist fighters. 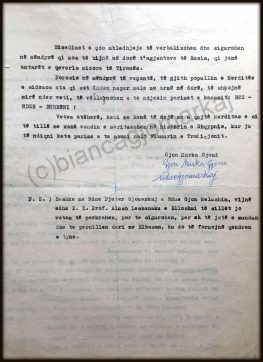 In 2006, some 2,300 pages of documents laying out major parts of the Albania Project under its two major cryptonyms: BGFIEND and OBOPUS. These documents were declassified by a U.S. government inter-agency working group, acting under the terms of the Nazi War Crimes Disclosure Act and are available at the National Archives in College Park, MD.

The following link lists some of the documents relating to the operations, in particular involving the BKI (Bloku Kombetar Independent) and NCFA (National Committee for Free Albania):

BGFIEND –  A country project for the purpose of selecting, training, and infiltrating indigenous agents into Albania to effect and support resistance activities for the purpose of overthrowing the communist controlled government in Tirana. This project also included the support of the National Committee for a Free Albania which consisted of a group of Albanians in exile who represented various political factions, but who were all dedicated to the liberation of their country from Communist control. In this connection the project included the support of propaganda activities, i.e., leaflets, publication of an Albanian newspaper (Shqiperia) and support of Voice of Free Albania. Crypt changed to OBOPUS in 1953.