When Gjon Markagjoni and his son Ndue arrived in Italy, in 1945, they sought to seek assistance from the Catholic Church, with whom the history of the Gjomarkajs has been tied for centuries.

One of the first to assist them in their plight was the Titular Bishop of Rhesaina, Giuseppe Gjonali (Zef Gjonali), who had served in the position of  Suffragan Bishop of Sape, Albania, from 1928-1935.

Below is a copy of the original letter, followed by the English translation 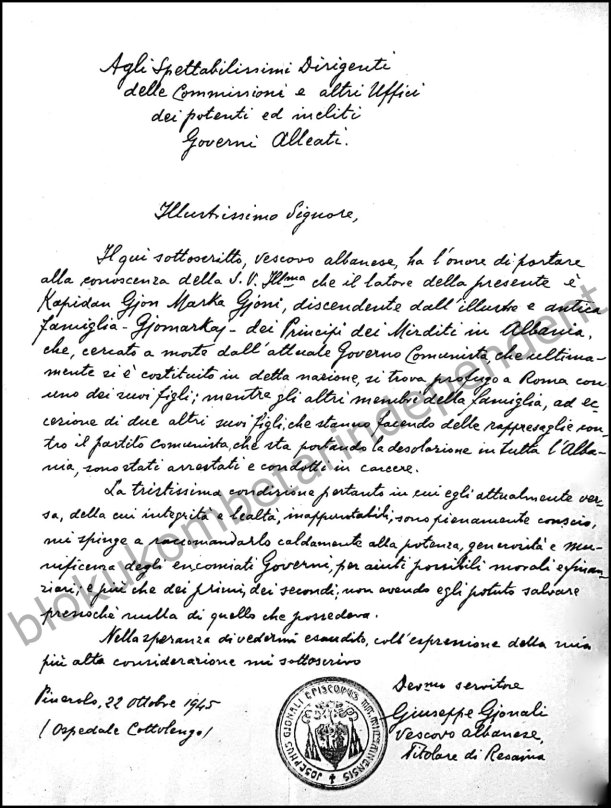 The undersigned Albanian bishop has the honor to introduce to Your Illustrious, that the bearer of the following is Kapidan Gjon Marka Gjoni, descendant of the illustrious and ancient family Gjomarkaj – Princes of Mirdita in Albania who, wanted under a death warrant by the current Communist government, which has recently established itself in that nation, finds himself a refugee in Rome with one of his sons, while the other members of the family, with the exception of two other sons of his who are fighting against the Communist party, which is bringing desolation to all of Albania, were arrested and taken to jail.

The very sad condition in which he currently finds himself, of whose irreproachable integrity and loyalty I am fully conscious, urges me to warmly recommend him to the power, generosity and magnificence of the commendable governments for possible moral and financial assistance, and more than the former, of the second, having failed to save almost anything he possessed.

In the hope of being heard, with the expression of my highest consideration Yours Truly,