The National Committee for a Free Albania (NFCA) was created in 1949 by British and American Services as an effort to join together all the exiles and refugees from Albania and thereby providing a united front against the communist regime. It opened its international headquarters in New York City on July 15, 1950. 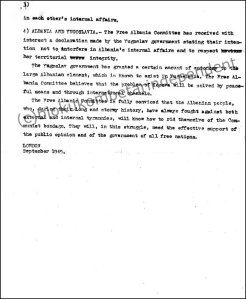 The BKI as a whole was not invited to join the committee, however several individual members were approached individually and offered membership. The principal member who was invited to join was Ndue Gjon Marku (Gjomarkaj). He was approached in 1949 by two British personalities. BKI’s realization to join forces with NFCA was not realized until 1953.

Following are numerous documents from the archives of the CIA detailing the mission and activities of the NFCA from it’s beginning.

OBOPUS BG FIEND VOL. 3 (OBLIVIOUS NATIONAL COMMITTEE FOR FREE ALBANIA)_0001-NFCA 1951 –“The major activity of the NFCA is to attempt to coordinate the resistance efforts of Albanians in exile who are fighting against Communism.”

OBOPUS BG FIEND VOL. 3 (OBLIVIOUS NATIONAL COMMITTEE FOR FREE ALBANIA)_0016-NCFA Formation-BKI Mention 1951 – “It was decided that a broader base was desirable and efforts were made to include an uncompromised number of the BKI on a personal, not party, basis and a representative of the BKI in the NFCA.”

CIA-RDP82-00457R013600120003-9-NCFA 1952 – “The National Committee for a Free Albania (NFCA) is highly regarded by the entire population. The people have enthusiastically received leaflets signed by the NFCA which they have picked up and passed on whenever possible….”

OBOPUS BG FIEND VOL. 3 (OBLIVIOUS NATIONAL COMMITTEE FOR FREE ALBANIA)_0003-NFCA Report 1952-53 – “Apparently, the ZRCROWNS feel that Abaz Kupi and the BKI will play important roles in any invasion of Albania staged from Jugoslav soil. For this reason, the ZRCROWNS (again RWLUMPIT) are now demanding the entry of the BKI into NFCA and are attempting to establish a more friendly relationship with Abaz Kupi.”