The letter displayed below was written to the Holy See sometime in early 1947, most likely by Ndue Gjon Marku. The fact that the death of Mark (June 1946), the son of Gjon Markagjoni and the mention of his second son, Sander, still fighting against the regime, dates the letter to early-mid 1947, as Sander was killed August 9, 1947.

The letter is an open plea for assistance for the Albanian anti-communist emigrants residing in Italy. At the time they were faced with many difficulties having escaped from Albania and living in Italy as refugees. Times were hard for everyone. Italy was just readjusting to life after WWII and trying to rebuild, now they were also faced with a large amount of political refugees from Albania, who was under communist rule. It was a precarious time.

The leaders of the BKI were trying to do everything possible to make life easier for their people and to that end they consistently counted on the Catholic Church for assistance. The relationship with the Church was a long one. Through the centuries the people of Northern Albania fought relentlessly against the Ottoman Empire, defending and protecting their religion. And they were never conquered. Now they looked to the Church for support when they needed it most. 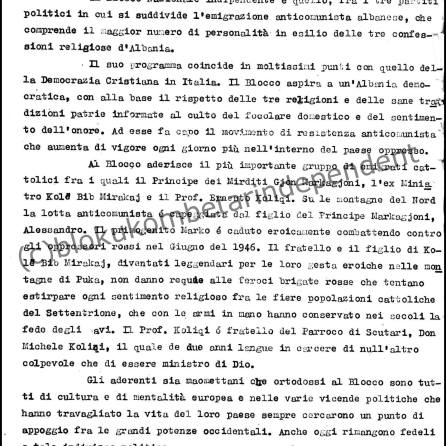 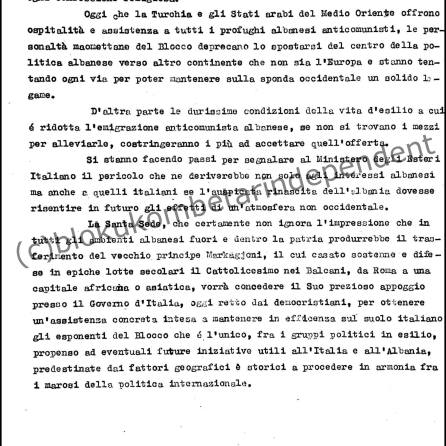 The Independent National Bloc is among the three political parties into which the Albanian anti-communist emigration is divided; the one which includes the largest number of personalities in exile of the three religious denominations of Albania.

Its program coincides on many points with that of the Christian Democracy in Italy. The Bloc aspires to a democratic Albania, with a foundation of respect for the three religions and of the healthy traditions of their homeland, based on the family nucleus and honor. They are headed by the anti-communist resistance movement, which increases in strength daily within the oppressed country.

The Bloc is joined by the most important group of Catholic emigrants including; the Prince of Mirdita, Gjon Markagjoni, the former Minister Kole Bib Mirakaj and Prof. Ernest Koliqi.

On the northern mountains the anti-communist struggle is led by Prince Markagjoni’s son Sander. The first-born, Mark, fell heroically fighting against the red oppressors in June 1946.

The brother and son of Kole Bib Mirakaj, who became legendary for their heroic deeds in the mountains of Puka, do not give rest to the fierce red brigades that try to eradicate any religious feeling among the fierce Catholic populations of the North, who with arms in hand have preserved the faith of their ancestors over the centuries.

Prof. Koliqi, brother of the Parish Priest of Shkoder, Father Michele Koliqi, who for two years has been languishing in prison being guilty of nothing more than being a minister of God.

The ardent Muslims and Orthodox in the Bloc are all of European culture and mentality, and in the various political events that have troubled the life of their country always sought a point of support among the great western powers. Even today they remain faithful to this political direction.

Atheist communism, the common enemy, imposes the closest fraternal union on everyone, where the needs of every religious sect are taken into account.

Now that Turkey and the Arab states of the Middle East offer hospitality and assistance to all anti-communist Albanian refugees, the Muslim people of the Bloc,  disapprove of the shift of Albanian politics to another continent other than Europe and are trying every way to maintain a solid bond on the western shore.

On the other hand, if means to alleviate the harsh conditions of life in exile, to which the Albanian anti-communist emigrants are reduced, is not alleviated, it will force the majority to accept that offer.

Steps are being taken to report to the Italian Ministry of Foreign Affairs the danger that would ensue, not only to Albanian interests but also to Italian interests, if the hoped-for rebirth of Albania were to be affected in the future by the effects of a non-Western atmosphere.

The Holy See, cannot ignore the impression which would be given if the relocation of the old Prince Markagjoni were to occur from Rome to an African or Asian capital; the relocation of someone whose family supported and defended Catholicism in the Balkans.

He would like to grant his precious support to the Government of Italy, today governed by the Christian Democrats, in order to obtain concrete assistance aimed at keeping the exponents of the Bloc working on Italian soil and the only one among the political groups in exile inclined to any future initiatives useful for Italy and Albania, predestined by geographical and historical factors, to proceed in harmony between the waves of international politics.