This biographical list dates between 1950-1952 and is among the documents of the personal library of Kapidan Ndue Gjon Gjomarkaj. 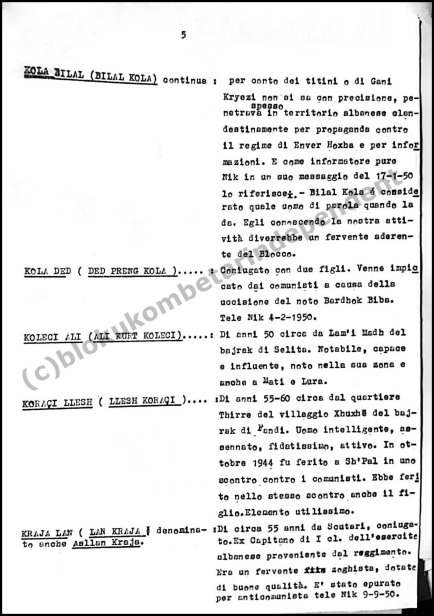 JAKU DOD (DOD NDREU JAKU): Around 55 years old from Kushneni (Mirdita), married. While remaining in his residence he gave assistance to the mission of Gjon Gjinaj.

JAKU PAL (PAL JAKU): Around 53 years old from Levoshe (Berisha), ex Lt in the reserves. Very good individual belonging to a large family and native of the area. Associate of Kol Bib Mirakaj.

JAKU ZEF (ZEF NDUE NIKOLL JAKU: Around 40 years old from Spac, married with three children. Fierce anti-communist was arrested by the red forces and thereafter due to the tortures inflicted died in prison in Shkoder.

JAKUPI JAVER (JAVER JAKUPI): From Shipshan. He along with his family are distinctive for their valor and bravery. Associate of Mirakaj.

JAKUPI SALIH (SALIH JAKUPI): Around 40 years old from Srroj, village of the Bajrak Ketej Drini, married with children. Shopkeeper now at large to fight against the communists. He belongs to one of the most valiant and influential families in the area. He is not on good terms with Muharrem Bajraktari but is however a personal friend of Prince Gjon Marka Gjoni.

KARACI LLESH (LLESH GJET KARACI): From Xhuxha of Fan, 55 years old, married with four children, ex honorary officer at the time of Zog, man of rare qualities and most trustworthy. In fact he lended great service to the mission of Gjon Gjinaj and following took refuge in Yugoslavia. Tele Nik 11-1-50.

KASA ISMAIL (ISMAIL KASA): From Bixille (Zaranike). Led a band of 300 nationalist forces defending the surrounding area from the communists. Enjoys great influence among the people of Zaranika. Home was confiscated and family confined. The communists did everything to catch him because they considered him a fierce adversary.

KAZIJA DED (DED KAZIJA): From Orosh, married with a little girl. The family is confined in Berat and he himself was tried by the communists for the murder of Bardhok Biba. Tele Nik 16-1-50.

KEQI PRENG (PRENG GJERGJ KEQI): From Lura, Captain of the Albanian army, around 40 years old, man who enjoyed a lot of influence in his area, decisive and active, was one of the strongest champions of the resistance until the day when there was a struggle with communists in which he was mortally wounded and captured along with his nephew Gjon Marka Gjergji, 25 years old, also wounded. Preng, following the harsh tortures sustained and due to his grave injuries died in prison. This happened in 1948. Tele Nik 16-1-50.

KIMEZA PJETER (PJETER NDUE KIMEZA): 1 Around 50 years old from Kimez, village of Kalivare of the Bajrak of Spac, married. Went on the run to fight the communists and made himself available with the group belonging to the mission of Gjon Gjinaj lending precious services. Audacious and very influential in his area. Trustworthy. Extremely useful member. Tele Nik 17-1, 28-1 and 20-2-950.

KIRI KOL (KOL KIRI): Around 50 years old from Shkoder, married, shopkeeper. Enjoys well known influence among people in the smaller neighborhoods. Man of courage, strong initiatives, decisively anti-communist, imprisoned a number of times. When released from prison the evidence of the tortures were easily visible. A precious member and friend of the leaders of the Bloc. He is brother to a Franciscan Priest, Frano Kiri, of whom there is no news and has probably been put in prison without trial. Kol Kiri is also mentioned in one of Nik’s messages for his anti-communist activity. In the first semester of 1951 he took refuge in Yugoslavia.

KIRI NDOK (NDOK KIRI): Around 50 years old, from Shkoder, married, public worker. Enjoys undisputed prestige among the strong neighborhood of Rus, which has many times contributed to the decisive uprising of its citizens. Due to his popular origins and the large following of his people, Ndok Kiri should be considered a worthy member in as much as if there is an insurrection he would bring a first class contribution. He is the head of a large family of many capable armed men. Nik in one of his messages points him out – for the information attained from the noted Hil Shllaku – as a fervent anticommunist.

KOLA BILAL (BILAL KOLA): Around 40 years old from Matzukolli of Mati. He is very good and comes from a noble family in the north of Albania. During WWII he lent his services to the British missions. Went into hiding and ultimately reached Yugoslavia from where, according to the Yugoslavs or Gani Kryezi, we don’t know exactly, frequently entered the Albanian territory clandestinely for propaganda against Enver Hoxha’s regime gathering information. Also an informant, as referenced by Nik in one of his messages from 17.1.50. Bilal Kola is considered a man of his word when he gives it. Aware of our activity he became a fervent participant of the Bloc.

KOLA DED (DED PRENG KOLA): Married with two sons. Was hanged by the communists as a result of the death of Bardhok Biba. Tele Nik 4-2-50.

KOLECI ALI (ALI KURT KOLECI): Around 50 years old from Lam i Madh of the Bajrak of Selita. Renowned, able and influential, known in his area and also in Mati e Lura.

KORACI LLESH (LLESH KORACI): Around 55-60 years old from the area of Thirre in the village of Xhuxhe of the Bajrak Fan. Intelligent man, level-headed, trustworthy, active. In October 1944 was injured at Sh’Pal during a skirmish with the communists. His son was also injured in the same skirmish. Very useful member.

KRAJA LAN (LAN KRAJA) aka ASLLAN KRAJA: Around 55 years old from Shkoder, married. Ex Captain of First Class of the Albanian Army, hailing from the regiment. Was a fervent Zogist, with many good qualities. He was purged as an anticommunist, tele Nik 9-9-50.