By April 25, 1951, after the defeat suffered on  December 2, 1950 at the Battle of Zepe, the CHARITY group had made its way to the Munella plateau, after having been helped across its escape route by influential leaders and notable members of the Kurbin, Alessio and Mirdita regions. As a result of the betrayal by Frrok Kol Cuni (from the village of Kodra Keqe, Kimeza), who was subsequently executed and Kol Marka Kola (from the village of Gojani, at the time a teacher at Kodra Keqe), government forces estimated at 600 men were aware of the group’s presence in the area and on May 6, 1951 moved against it.

The Nationalist group, led by Gjon Gjinaj and including 16 other members, was part of operation CHARITY, a joint operation involving British, Italian and USA forces, which initiated with the launching of Plan II in November, 1949.  What follows is the account, as related to the Security Forces by the team leader, of the events which transpired during the Battle of Munella. The report was received from Gjon Gjinaj while exiled in Rankovicevo, Yugoslavia, on 17 May, 1952.

During the fire fight, which lasted far into the morning of the following day and consisted of a withdrawing action through the Streli Pass and the village of Hebje on the Domgjon summit to the Runa highlands, Pjeter Marka Shkoza was seriously wounded and left at Hebje in the care of Ndue Perlati.

Marka Preng Kola, too, was badly wounded and, having lost his weapon, was captured by government forces and taken to the prison at Puka where he died three days later without betraying his comrades, despite the tortures to which he was subjected.

From source’s narrative it appears that the government forces came out second best in the encounter, and he avers that a number of them were imprisoned and others read out of service for their poor showing against the CHARITY group.

This battle was one of many fought by the Nationalists from abroad with the aid of resistance fighters on the ground in Albania. 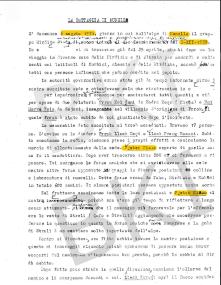 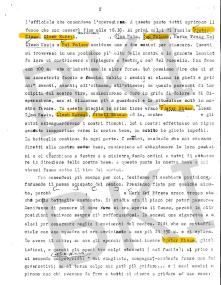 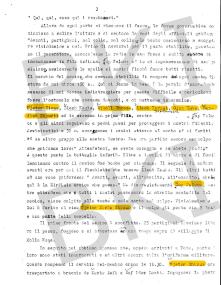 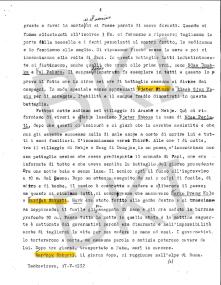 It was Sunday, May 6, 1951, the day on which the Mirdita group began to function again on the Munella Alps after the battle of December 2, 1950 . I and (redacted)1 had been there since April 25, having arrived after a long journey in different areas of Mirdita and Alessio where we had meetings and gatherings with the men at-large of Kurbini, Alessio and Mirdita, as well as with individuals who enjoy great influence among the people.

The government authorities had already been informed for some time about our aforementioned location and were only waiting for me and (redacted) to return in order to overtake us and annihilate us all; and that is due to the betrayal of two informers: Frrok Kol Cuni, from Kodra Keqe (Kimez) and Kol Marka Kola from Gojani, a teacher in the village, originally from Frrok.  Said Frrok Kol Cuni was immediately executed by us after the incident.

The date mentioned above finds us besieged. We were 17 people. The warning was given by Frrok Llesh Doci and Llesh Preng Hasani. We immediately disassembled the radio, each took their effects and began the march away from the location. Pjeter Kimeza, an expert in that area, was the leader. After going about 800m we stopped to rest. There we saw enemy forces approaching the location, while other forces were stationed in groups in different positions on the hills and river mouths. These forces were from Puka, Mirdita and Kukes; 600 men total. They had also placed mortars in certain locations.

In the meantime we examined all their positions and Pjeter Kimeza, at our request, since there wasn’t any time left to think long without attacking, replied that the most favorable passage for the offensive was the summit of Streli (Qafa and Strelit), adding that it was necessary to ponder the question as the enemy forces were numerous and the Streli gorge is a very important path in the Alps.

While we were discussing it a dense fog invaded our position which encouraged us somewhat, as we hoped to pass without being detected by the enemy. We were soon deceived because the fog immediately cleared.

Having made little way in that direction, we heard the alarm from the enemy and saw them in front of us. Llesh Karaqi opened fire killing the officer in charge of the operation. At this point everyone opened fire, which did not stop until 1630. At the first shots of the rifle Pjeter Kimeza, Llesh Karaqi, Gjon Kuke, Cup Paluca, Marka Prenga Kola, Llesh Kaziu and Pal Paluca kill one or two enemies each. They were in a higher position than the rest of us and the grenades thrown by them forced us to retreat to the right, south of the stream. We did not go 100m when we ran into other forces. Here we can say that we met face to face.

The enemies immediately stand up and shout: “Forward, forward; attack, attack“, but when many of them were hit by our bullets, they began to cry out in pain and despair and no longer stood up to face us and the situation changed in our favor.

In this skirmish the ones ahead were: Pjeter Kimeza, Llesh Gjon Kaziu, Llesh Karaqi, Nikoll Shkoza and myself, while (redacted) and the others safeguarded our backs. Here our people try to make an inopportune retreat towards our base, but I immediately prevented them.

The battle continues on all sides. The enemies, believing that we were headed for our base, begin to abandon their positions and circle us right and left, giving orders for everyone to attack in our direction. At this point our base and ourselves were under mortar fire.

Since there was no escape for us, we decided to change position, forcing a path occupied by the enemy. We took a breath for a few minutes, because [redacted], [redacted] and Mark Zef Ndreca were too tired for the battle. We are now studying our plan to pass. We decided to head where the fire had opened, because the other positions were getting stronger and stronger. I lit a cigarette and got up to better watch the enemy’s movements. I saw that a non-commissioned officer with a squad had approached no more than 150m and was spying on us. I had the machine gun; but I didn’t shoot him, instead I called Pjeter Kimeza, I pointed to him, and he fired three separate shots (with the rifle); at the first and second blow the non-commissioned officer cried out: “You were wrong, comrade“, believing he was one of the government, but at the third blow he could no longer scream…and his men understood who they were dealing with and they all began to shout with one voice: “Here, here, here are the reactionaries.”

Then the fire was reignited from all sides, the government forces began to climb the hill and the voices of the officers were heard shouting: “Come on partisans, on the hill, on the hill.” The bombs begin to explode very close to us. Before setting off for the designated spot, we broke the generator, hid the radio in a ditch, and immediately set off in single file. Cup Paluca and I took hold of a position, securing our backs until we were all reunited.

The circle of the enemy that we had decided to break at any cost was about 150m away from us. Here we gave ourselves the besa (the word of honor), that none of us would retreat no matter how difficult and dangerous the obstacles we faced were and we set out.

Pjeter Kimeza, Llesh Kaziu, Nikoll Shkoza, Llesh Karaqi, Gjon Kuka, Bardhok Shkurti and I were in the front row, while [redacted], Cup Paluca and the others followed a few steps behind to protect our backs. Approaching 50m we saw the enemies around the dead body and the wounded and another group to our right. A shot had not yet been fired when we shouted to them: “Wait for us, if you have courage and if you are brave“. At this point the battle raged on. In addition to machine gun and rifle shots, we threw two grenades each at the enemy. The signal for us to move forward was the whistle that Llesh Kaziu blew. The others, all with one voice shouted: “Forward, forward, assault, assault, here is the heroic Mirdita that is passing by.” But unfortunately, Cup Paluca 2, while he was waiting for all of us to pass the tight hold guarded by the enemy, is hit in the head and falls dead instantly. Very close to him was Pjeter Marka Shkoza, who was wounded in the face, sustaining a blow which took away 3 teeth and part of his jaw.

The first front of the enemy is defeated. 25 partisans flee leaving the pass free and stand on a ramp above the village of Molla Kuqe. Later we learned that, as soon as they arrived in Puka, part of them were imprisoned and others were stripped of their military uniforms.

When we broke the enemy’s circle it was 1630. Pjeter Shkoza was carried by Marka Zefi and Zef Ndue Lushi. He was holding the gun ready to kill himself if the enemy appeared in front of us again. When we were about 3km away we stopped to rest; we removed the damaged part of the jaw and the dangling teeth of our wounded man, we medicated him and bandaged him as best we could. We rested until evening fell and then we set off towards Fan.

In this battle everyone indiscriminately distinguished themselves, even those for whom it was the first time, such as Ndue Duskhu and Pal Paluca. The stoicism was exemplary in all of them and this is proved by the fact that in a battle of about six hours no one left their comrades. Pjeter Kimeza and Llesh Gjon Kaziu are to be especially appreciated for their courage, skill and stolidity in this battle.

At night we go to the village of Arushe and Hebje. Here we stock up on food and in Hebje we leave Pjeter Shkoza in Ndue Perlati’s house, after he assures us and swears that he would assist him and that nothing bad would happen to him, even if cost his and his family’s life. We walked towards Thirre. At 1 o’clock in the morning, between the village of Hebje and San Domgjon, within a few steps, we meet with an enemy patrol that was in charge of Fan’s command, who was informed of everything and who had heard the battle of the previous day. It was a dark, moonless night. The enemy suddenly opened fire 10m from the pass. After an attack carried out by us with rifle shots, machine guns and grenades, the enemy is forced to give in to free the passage but when we all gather, we realized that Marka Preng Kola and Bardhok Shkurti were missing.

Mark had been wounded in the right leg and was limping along; the rifle had escaped from his hand and had fallen into a 50m deep ravine. He spent the whole night in that condition and since he was unarmed and unable to take his own life, so as not to fall into their hands, he was captured. Government officials tortured him close to death, but they were not able to get any information from him. After three days, he was transported to Puka where he died in prison.

The next day Bardhok Shkurti joined us on the Runa Alps.

2 On May 8, 1951 Cup Paluca’s body was carried by a vehicle to Puka. His body was exposed to the public for the entire day.