After the formation of the National Independent Bloc – Bloku Kombetar Independent (BKI), in 1946, major events began to occur in the fight to free the homeland.

In 1948 the Foreign Branch ‘P’ of the CIA was approached by the Italian Navy Intelligence, who were supporters of the BKI, and presented them with a proposal for the mounting of a joint operation in Albania.

The BKI was the first organization in exile to participate in the initial operations to infiltrate Albania, in support of the nationalists and their fight against the communist regime of Enver Hoxha.

The following document dated 9 February, 1949, is the original ‘order’ signed by Gjon Markagjoni and Ndue Gjomarkaj, Leaders of Mirdita: 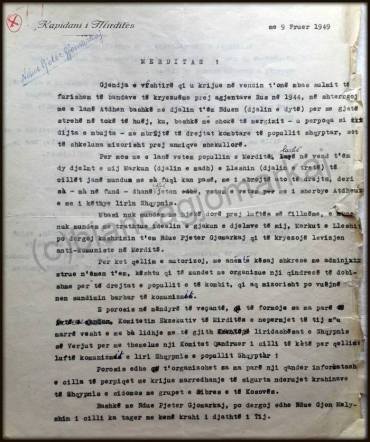 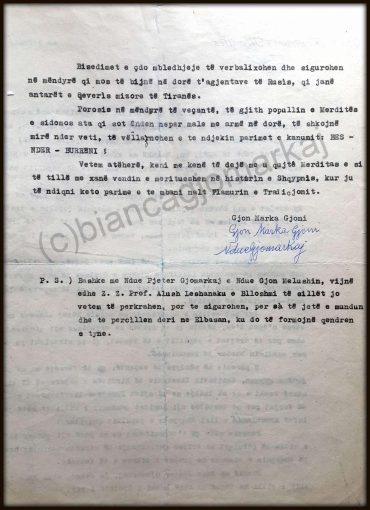 The national fighters welcomed this letter and its guidelines, and based on the instructions given by Kapidan Gjon Markagjoni and Kapidan Ndue Gjomarkaj, it was decided at this meeting that Ndue Pjeter Gjomarkaj should be elected leader of the resistance, while Ndue Melyshi the second in command.

Despite being pursued by communist forces they decide to hold another meeting in Bukmir, on 10 April 1949, where the following decisions were undertaken:

On the dates of 1-3 July, the Assembly was held and it was decided to reorganize the organization “League of the Mountains”, originally created by Kapidan Mark Gjon Marku in March 1945, where after his death on June 14, 1946, the organization was led by his brother Kapidan Llesh Gjon Marku, until he also fell in combat on 14 August 1947 in Munegj.

This Assembly of National fighters, held from 1 to 3 July 1949, undertook the following decisions:

After the formation of the organization came into force the council body made the following decisions:

On August 9, 1949 they came together to review the situation and during the meeting it was learned that Bardhok Biba had gone to Kacinar to gather workers for labor to be sent across various areas outside of Mirdita, and he would go to Shpal that day. The news was confirmed and everyone decided on his execution.

For the task they assigned a fighter of the ‘retribution body’ and the shooter laid in wait at Valmer’s neck where he successfully executed the assassination. Ndue Pjeter Gjomarkaj signed the statement of execution on behalf of the “Executive Committee“.

The death of Bardhok Biba would be avenged in a horrible sweep by the vicious General Mehemet Shau on 18 August, 1949. He went on to round up 14 people from the Mirdita region and massacred them in retribution:

The CIA recognized that Bardhok Biba was the traitor responsible for the ambush and murders of Kapidan Mark Gjon Marku in June 1946 and Kapidan Llesh Gjon Marku in August 1947, as shown on this  CIA report.

Proof that this mission was indeed initiated by the Bloku Kombetar Independent, and that the operation was the catalyst for following operations which would last until 1953, is shown in this CIA report dated 3 May 1949:

“The Albanian leader in Italy who has worked with the Italian Navy and OSO in mounting this operations is Ismail Verlaci”.

“This plan entered its operational phase on 15 February 1949……were dropped under excellent condition over a pinpoint in the Serrrisht district, in the Mirdite region of Albania.”

Confirming beyond a shadow of a doubt that the mission was indeed carried out by members of the BKI.

In this CIA report dated 15 December, 1949, the assassination was described as the “most significant single action of the Albanian resistance movement in recent months.”